skip to main | skip to sidebar

This is called "Awesome Songs:"

1. I teach my students to approach essay writing as simply following a formula: your idea + primary textual evidence + MLA citation + your analysis + secondary textual evidence + MLA citation + your analysis (not all in one sentence, of course) but I cannot do basic math. Math traumatized me throughout school. Numbers freak me out; even looking at a calendar for too long gives me a headache.

3. I haven’t eaten meat, fish or chicken in 24 years. I’m very particular about what food I consume; I don’t eat oily, fattening foods (except high quality French fries once in a while); I always order salad dressing on the side, and usually just use olive oil; I never use butter; I don’t drink soda and I only drink 100% juice. However, I see absolutely nothing wrong with drinking a glass of wine (or two) every night of every week of every year; I sometimes eat half a bag of Baked Ruffles by accident; if there were a gelato shop near my apartment, I would eat gelato every day; I really like (good) beer; I often eat 3 Peppermint Patties on my way to brush my teeth and go to bed.

4. I am fairly OCD about certain things—Purell-ing my hands if I have to touch a subway pole or heavily-trafficked doorknob; not leaving the house without lip stuff (or gum or tissues); keeping important documents in a fireproof safe; remembering friends’ birthdays—and kind of gross (for lack of a better term, though I am not frat-boy-gross) about other things—I wash jeans maybe once a month; I am six months beyond needing new bras and I can’t even admit how long it’s been since I mopped the floor in my apartment (I sweep every day, but I HATE mopping).

5. I have no problem speaking to a classroom full of students on the first day of school, and I love reading my work in front of an audience—I barely feel nervous—but the thought of attending a cocktail party alone—chatting, schmoozing—makes me nauseated.

6. I spent nine summers (the best summers of my life) at sleep away camp. Last summer, I was at a friend’s house in suburban New York, enjoying the starry evening, and a frog crossed my path. I almost pissed myself.

7. I like knowing exactly where I’m going yet I have a very poor sense of direction. The only place I can identify north or south is the Hamptons, because the sun rises in the east and sets in the west.

8. I went skydiving for a friend’s 30th birthday—I jumped out of a plane from 13 miles in the sky—but a hot, crowded subway car that stops in a dark tunnel gives me heart palpitations.

9. I like feeling in control but I have absolutely no self-control; if you put a bowl of M&Ms, a glass of wine or a (very light) cigarette in front of me, I will eat, drink and smoke them.

10. I cannot live without music. I love music. I need music. And I am totally tone deaf—I literally cannot sing.
Posted by Meri Weiss at 8:39 PM 2 comments:

Shadow of the Day

I heard this song on the radio this morning and can't stop listening to it. I have no feelings about the video, but the song deeply affects me--it's the soundtrack to the last two weeks of my life.

Shadow of the Day by Linkin Park
Posted by Meri Weiss at 4:37 PM No comments:

Grief is dark and heavy.
And unbearable.
One hour I am angry at the pointlessness, the next hour I am engulfed in pain.
And paralyzed. Grief is not conducive to writing, or even re-writing.
Maybe it is what I am writing. Maybe it is because I cannot focus.
Or maybe it is that I am feeling, processing, mourning,
not repressing or suppressing.
Which is good. I guess.
This is where I am right now.
"This too shall pass..." 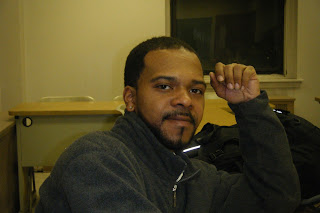 In Honor of Lost Potential

My favorite student died over the weekend. His name was Brian Johnson. I know I’m not supposed to admit to having a favorite student, but Brian was an extraordinary student, and a kind, generous man. I met him in my Introduction to Literature class two years ago; he and his best friend Michael were the anchors in the class, meaning I could consistently count on them to discuss the assigned readings. Brian’s analytical skills were terrific; he just needed to learn the literary vocabulary with which to discuss his ideas. He possessed natural writing skills; he just needed someone to infuse him with confidence, and teach him how to use the literature itself to prove his ideas. In the middle of the semester, the apartment building in which he lived with his “Pops” burned down. He came to see me the next day, worried his assignment would be late because his textbooks had been destroyed. Most students would use this as an excuse to not hand in assignments, but Brian merely asked for an extra week so he could read the assigned short stories in the library. When I handed him a new textbook and dictionary, he was thrilled, and I knew he was a man who not only cherished his education but also truly enjoyed reading and learning about literature.

Brian was a Psychology major, but I persuaded him to take my 20th Century American Fiction class in the fall of 2008. By October, he had become a double major, in Psychology and English. At the end of that semester, he wrote a publishable research paper on Flannery O’Connor’s Wise Blood. As he tackled subsequent upper-level Psychology and Literature courses, his desire to learn increased, as did his grades. He often stopped by my office to show me a paper he was working on—with pride I realized his writing skills had improved to the point that he could share his knowledge with other students.

In the fall of 2009, I hired Brian as a Peer Tutor as well as a Work Study Student for the English Department. I saw him every day. He called me “Miss.” On Mondays, he asked about my weekend. He talked to me about his son, who lived with him every weekend. He laughingly told me how he had been convinced by an infomercial to buy the “Your Baby Can Read” DVDs; he figured it wasn’t too early to show his son the importance of words. He loved movies—we laughed about the fact that he and Michael were probably the only two people who traveled from the South Bronx to the Upper East Side in order to see Woody Allen’s new movie. He also loved reading. Faulkner and Poe elicited his enthusiasm—I think because they reveal the darker side of human nature, which stimulated Brian’s thoughts as connected to both psychology and literature. Oftentimes Brian stopped by my office, smiling his sweet smile, to show me a book he’d found at The Strand—the novelty of inexpensive books, used but in perfect condition, never wore off for him.

Brian had been thriving as a Peer Tutor, and in my Insane Characters in Literature course this semester, his intellectual curiosity and academic confidence were apparent not only to me but also the other students. Last week, Brian asked me about graduate programs, and together we looked online at grad programs that would incorporate his love for literature with his interest in psychology. He was thinking about teaching, or counseling in a school setting. I was looking forward to writing an amazing letter of recommendation for him.

On Saturday, Brian was alone in a room and had a seizure, and he died. To say his life was “full of promise,” or that he had a “bright future ahead of him,” is a gross understatement. Brian didn’t command attention when he walked into a room, but you knew he was there. He possessed a quiet dignity. His subtle optimism and thoughtful generosity affected the lives of those around him, especially mine. Brian was the type of student who made teaching exciting and worthwhile, and I can’t bear the thought of teaching on Thursday nights without him sitting beside me. I have been an English professor for the past ten years—no student has earned my respect and affection the way Brian did. I guess my grief will eventually subside, but I won’t stop mourning him. The world was a better place with Brian Johnson in it.
Posted by Meri Weiss at 10:33 PM 2 comments:

"If I got rid of my demons, I’d lose my angels," wrote Tennessee Williams.

What comes first, the creativity or the darkness? Do artists create because they need to exorcise their demons, or is it their very creations that lead to the darkness? This conundrum continues to come up in the class I'm teaching this semester, Insane Characters in Literature (many of the characters/literature were created by authors who suffered from mental illness). The number of artists, especially writers, who were/are
drinkers or drug users is extremely high, and can't be a coincidence. The number of artists, especially
writers, who have committed suicide or suffered from some type of mental illness is off the charts, so to speak. No other career loses so many people to suicide.

What comes first, the emotional pain or the creativity?
Posted by Meri Weiss at 7:59 PM 1 comment: 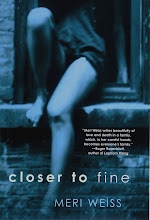 Available in stores and online

A Few of My Favorite Sites